125 European international airports have so far declared their actual departures and arrivals for June and the increase they demonstrate over the month of May is 66% points.

The top 20 internationals tell the story: 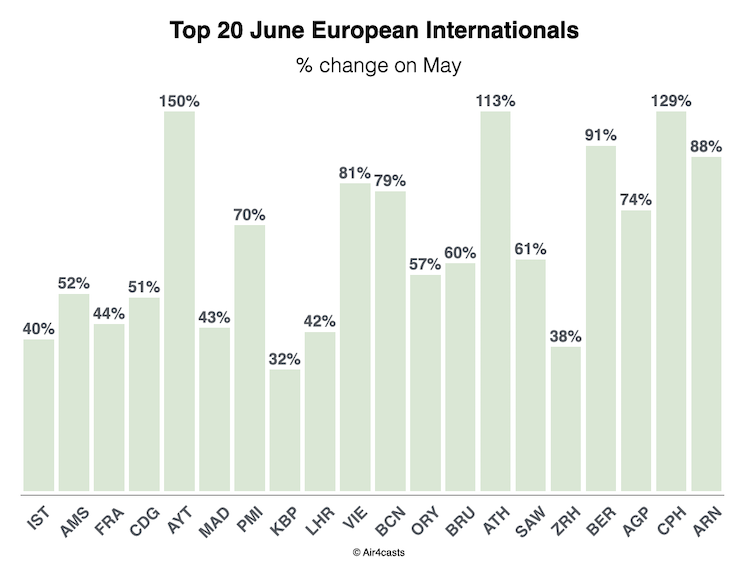 That there is a boom in leisure travel waiting to be unleashed is beyond doubt and June shows the evidence of the first tentative steps.

However an important comparison is between Frankfurt ranked #3 and London’s Heathrow languishing at #9. Frankfurt, and for that matter Amsterdam, despatched double the number of passengers at Heathrow.

The comparison is all the more relevant since today is the day the English government will lift many of the restrictions on internal movement. The restrictions on international travel, for the most part, remain and are subject to daily change. The UK conundrum, as is well known, is rising cases opposite imperfect knowledge of vaccine efficacy; it is not a conundrum which is confined to the UK though the imminent scale of the problem is unique.

July and August in Europe, the key months, will be driven by dictats too often generated by governments not in control of the facts and unused to the necessity of getting short-term decisions right.

One of the hopes for August is there may be a re-opening of transatlantic routes if only on a one-way basis. Perhaps in the Autumn the US administration will look more favourably on allowing the arrival of European nationals. But that must depend upon perceptions about the Delta variant and those perceptions will be significantly influenced not only by July and August spread rates in the UK but also buy the extent to which European countries are either able to prevent its spread or accept its consequences.