The Air4casts Coronavirus module updates the 2020 monthly forecasts by airport and nationality every day to take into account each new hard piece of data from government travel restrictions, airline capacity reductions, flight cancellations, and when they happen, capacity increases.

Today’s March forecast drives out a whole new top 10 global international airport ranking, one not seen for many years and one with no airports in Asia/Pacific. 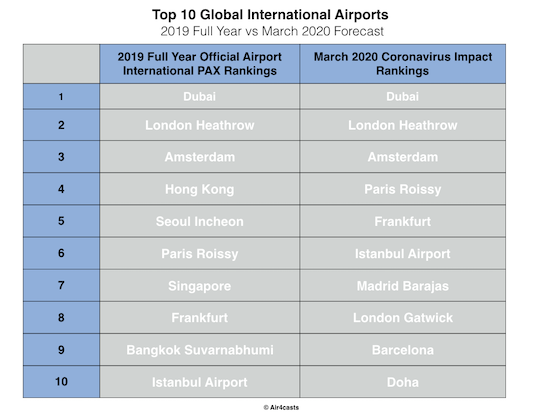 Hong Kong had already dropped into fourth place globally in 2019 because of the civil unrest but today’s March forecast places it far outside the global top 10 unless March produces a rapid improvement.

Both airports are however pushed right out of the top rankings given the current state of affairs, as is Bangkok Suvarnabhumi.

Although the big European and Middle Eastern hubs are also suffering Chinese passenger plunges these core hub businesses remain resilient for the moment.

There is however a growing fragility regarding air travel in general and this is the reason why the Coronavirus data module is updated daily.